With pulse fishing, a different technique is used. Instead of chains, electrodes are used to produce an electric field. The cramp response immobilises the fish for 1-2 seconds during which the fish are scooped up in the net. In the net the fish are outside of the electric field and the cramp ceases.The pulse trawl technique is particularly effective to catch sole because the sole cramp into a U-shape, which enhances the catchability.

Two companies have developed pulse systems for the Dutch flatfish fishery: HFK Engineering and Delmeco (previously Verburg-Holland). These pulse systems comply with the legal specifications with regard to the electrical characteristics and dimensions of the gears. The pulse technique is often used in combination with the SumWing technique. 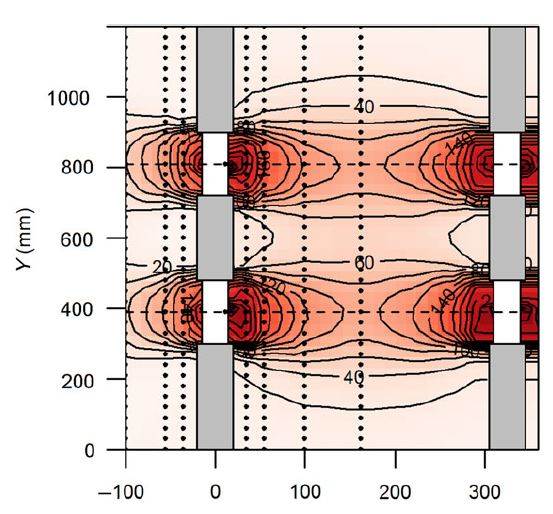 The time that an organism on the sea bed is exposed to sole pulses is around 1.6 seconds. It can be calculated by dividing the towing speed of the gear (2.5 m/s) by the length of the electrode (4 m). During this exposure, the field strength varies with the passage of the alternating conductor and isolator elements. 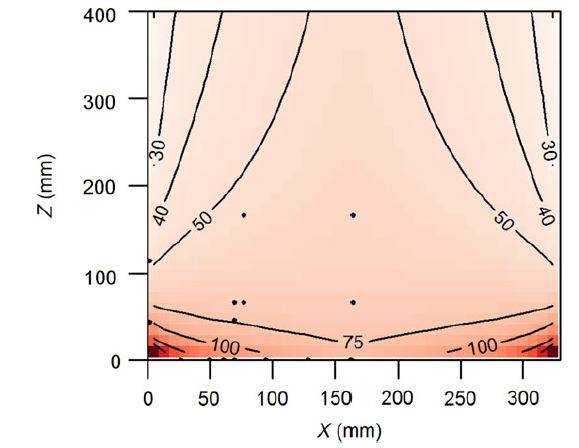 Pulse systems generate alternating positive and negative pulses with a frequency between 40–80 Hz and a pulse width of 100-270 µs. The peak voltage of a pulse is between 45 and 60 V. The total power per unit width of the gear is around 0.7 kW/m. During each pulse an electric current flows between a pair of electrodes. The direction of the current switches between the positive and the negative pulse. In between the pulses there is no electrical current. The electrical current flows for about 2% of the time (duty cycle). The effective voltage (mean square root) over the conductors is therefore much lower than the peak voltage. For a peak voltage of 60V, a square shaped pulse and a duty cycle of 2%, the effective voltage is 8.5 V (square root of 0.02*60*60) (Source: De Haan et al. 2016)

Rigging of a pulse system

The figure below shows the rigging of the electrodes of a 4m HFK Pulse wing (source: De Haan et al., 2016). The upper panel shows the side view with a vertical net opening of 0.43 m. The lower panel shows the 10 electrodes that run from the wing (left) to the footrope of the net (right). The electrodes create an electric field of about 4 x 4 meters. Each electrode consists of 12 conductor elements, evenly placed over a length of 3.92 m, that are in contact with the seabed. The conducting part of an electrode ranges between 26% and 40% of the total length that has contact with the sea floor. The isolated joint is used to exchange electrodes. To absorb the tensile forces on the electrode, a disc-protected rope is rigged alongside each electrode between the beam or SumWing and the ground rope. 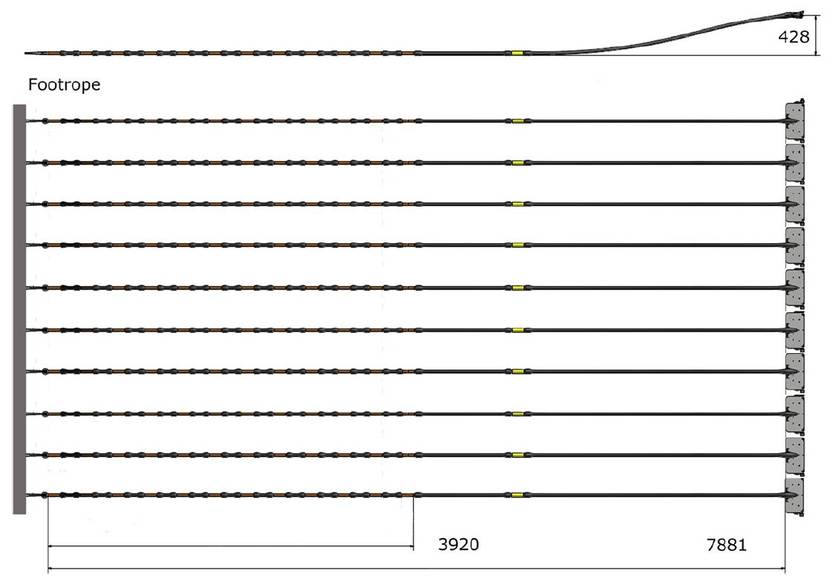 Rigging of a 4 mHFK pulse trawl